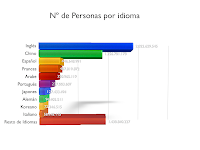 Spain is the third country in the European Union, after Hungary & Portugal, with the highest percentage of adults (a 46,6%) who don't speak any foreign language, according to data published today by the European statistic office, Eurostat.
Due to next Saturday's celebration of the European Language Day, Eurostat has released a report with data collected in 2007 about the perception that adults have on their linguistic competence and on language learning throughout their secondary education within the twenty-seven countries.
In the 21 countries with available information -all of them member countries except Rumania, Malta, the Netherlands, Luxembourg, Ireland & Denmark- the percentage of citizens that admit that they don't know any foreign language appears to be the 36,2%.
But in Spain, this number goes up to a 46,6%, only exceeded by Portugal, with 51,3% & Hungary, with 74,8%.
On the opposite side are countries such as Lithuania, where only a 2,5% of adults don't speak any foreign language; Sweden, with 5%; & Latvia with 5,1%.
On the other hand, France (41,2%), Italy (38,6%), United Kingdom (35,1%) or Germany (28,6%) register average rates.
In relation to the people who think they have a good command of a foreign language, the European community average is set on 35,7%, a percentage quite similar to Spain's rate at 35,5%.
When it's the case of two or more foreign languages, the European average goes down to 28,1%, a fall which is much more pronounced for Spain, where this percentage is 17,9%.
Citizens from Scandinavian, Baltic countries or Slovenia are the ones who seem to master more foreign languages when compared to the rest of Europeans.
The percentage of adults who know two foreign languages or more goes up to 71,8% in Slovenia, 67,9% in Finland, 66,1% in Lithuania, 54,9% in Latvia, 55,9% in Estonia or 50,4% in Sweden.
On foreign language acquisition during secondary education, Spain is distinguished by the high number of students that only study one language in this period (the double of the EU average) and the lower number of teenagers that study at least two languages, compared to other countries.
That means, that while in countries such as France, the Czech Republic, the Netherlands, Luxembourg, Finland, Estonia, Rumania, Sweden, Slovakia or Slovenia more than 90% of their students learn two foreign languages in secondary education, this number drastically goes down to 28,3% in Spain.
However, this percentage drops even more in the United Kingdom with 6,1% or in Greece, 6,9%
English is the most studied language by overwhelming majority, while in Ireland & the United Kingdom youngsters usually learn French.
These two English-speaking countries are actually the ones with the highest number of students that in secondary education don't study another language (51,4% in the United Kingdom & 18,8% in Ireland). These percentages are outstandingly higher than the rest of European countries.
In fact, Spain is the country with the highest percentage after the former two, with 3,9% of secondary education students that don't work with any foreign language.
Publicado por RNT en 23:37 No comments:

THE ENGLISH LANGUAGE IN EUROPE 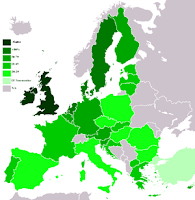 The English language in Europe, as a native language, is mainly spoken in the United Kingdom and the Republic of Ireland. Outside of these countries, it has a special status in Jersey and Guernsey (two of the three Crown Dependencies), in Gibraltar (one of the British overseas territories), Malta and Cyprus (two former British colonies). In other parts of Europe, English is spoken mainly by those who have learned it as a second language, but also, to a lesser extent, natively by expatriates from the English speaking world.
The English language is the official language of Gibraltar and one of the official languages of Wales, Republic of Ireland, Malta, Guernsey, Jersey, the Isle of Man and the European Union.
13% of EU citizens speak English as their native language. Another 38% of EU citizens state that they have sufficient skills in English to have a conversation.

Email ThisBlogThis!Share to TwitterShare to FacebookShare to Pinterest
Etiquetas: LanguageLearning

We're about to start a new course. This course 2009-2010, we want to make this blog be a relevant teaching tool. A place where you will be able to find help, practice, and an opportunity to use, see, read, listen to English in context in a meaningful way. It starts as an experiment... let's see where we get to. Good luck to all!
Publicado por RNT en 12:48 No comments:

Email ThisBlogThis!Share to TwitterShare to FacebookShare to Pinterest
Etiquetas: Blog
Newer Posts Home
Subscribe to: Posts (Atom)
This site is used with a non-profit educational purpose only. If you find content (photo/video...) you think shouldn't have been included here, please tell me so I can delete it. Thanks.