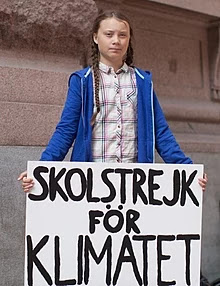 Greta Thunberg is a 16-year-old Swedish student who one day school striked for a week to protest against the Swedish government and its inactivity against global warming.
But how did all this start? Before August 20th last year, Thunberg went to school like most Stockholm teenagers. Some things had happened in Sweden during that summer that woke something up in her and she thought she had to do something about it. Sweden had been affected by a heat wave which had brought 50 forest fires burning 20.000 hectares.
So on August 20th, instead of going to school she stood in front of the Swedish Parliament and said she wouldn't go back until she was heard. Since then she has become known worldwide. Last Tuesday she gave a speech at the Climate Awareness Summit in the United Nations in New York.
Video: Greta Thunberg @ UN New York 23/Sept/19: