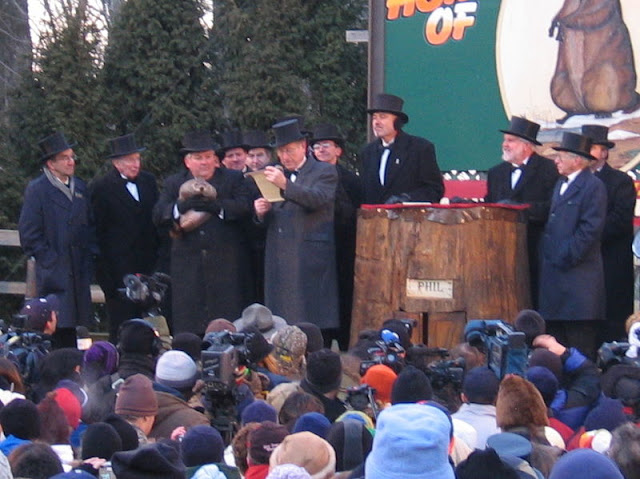 Groundhog Day is a holiday celebrated on February 2. It is held in the United States and Canada. According to folklore, if a groundhog emerging from its burrow on this day fails to see its shadow, it will leave the burrow, signifying that winter will soon end. If on the other hand, the groundhog sees its shadow, the groundhog will supposedly retreat into its burrow, and winter will continue for six more weeks. The holiday, which began as a Pennsylvania German custom in southeastern and central Pennsylvania in the 18th and 19th centuries, has its origins in ancient European weather lore, wherein a badger or sacred bear is the prognosticator as opposed to a groundhog. The holiday also bears some similarities to the medieval Catholic holiday of Candlemas. It also bears similarities to the Pagan festival of Imbolc, the seasonal turning point of the Celtic calendar, which is celebrated on February 1 and also involves weather prognostication.
Modern customs of the holiday involve celebrations where early morning festivals are held to watch the groundhog emerging from its burrow. In southeastern Pennsylvania, Groundhog Lodges (Grundsow Lodges) celebrate the holiday with fersommlinge, social events in which food is served, speeches are made, and one or more g'spiel (plays or skits) are performed for entertainment. The Pennsylvania German dialect is the only language spoken at the event, and those who speak English pay a penalty, usually in the form of a nickel, dime or quarter, per word spoken, put into a bowl in the center of the table. The largest Groundhog Day celebration is held in Punxsutawney, Pennsylvania, where crowds as high as 40,000 have gathered to celebrate the holiday since at least 1886.
Historical origins.
In Scotland the tradition may also derive from an English poem:
As the light grows longer
The cold grows stronger
If Candlemas be fair and bright
Winter will have another flight
If Candlemas be cloud and rain
Winter will be gone and not come again
A farmer should on Candlemas day
Have half his corn and half his hay
On Candlemas day if thorns hang a drop
You can be sure of a good pea crop.
This tradition also stems from similar beliefs associated with Candlemas Day and Groundhog Day. Candlemas, also known as the Purification of the Virgin or the Presentation.
In western countries in the Northern Hemisphere the official first day of Spring is almost seven weeks (46–48 days) after Groundhog Day, on March 20 or March 21. About 1,000 years ago, before the adoption of the Gregorian calendar when the date of the equinox drifted in the Julian calendar, the spring equinox fell on March 16 instead. This is exactly six weeks after February 2.
Video:
Publicado por RNT en 21:04