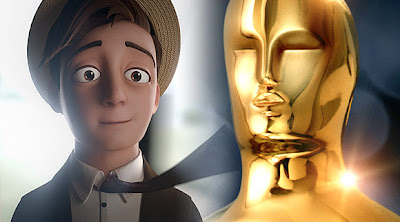 The Fantastic Flying Books of Mr. Morris Lessmore is an American animated short film by William Joyce and Brandon Oldenburg, created at Moonbot Studios in Shreveport, Louisiana. After winning over a dozen film festivals, the film was awarded the Best Animated Short Film at the 84th Academy Awards in Los Angeles last night.


Inspired, in equal measures, by Hurricane Katrina, Buster Keaton, The Wizard of Oz, and a love for books, The Fantastic Flying Books of Mr. Morris Lessmore is a poignant, humorous allegory about the curative powers of story. Using a variety of techniques (miniatures, computer animation, 2D animation) award winning author/ illustrator William Joyce and Co-director Brandon Oldenburg present a hybrid style of animation that harkens back to silent films and MGM Technicolor musicals. Morris Lessmore is old fashioned and cutting edge at the same time.


Plot: Following a hurricane which destroys his town Morris is whisked away to a colourful old house full of books which come alive and interact with him spreading happiness in the community. He remains their custodian for years until it is time for him to pass on and another guardian of the books take over from him.